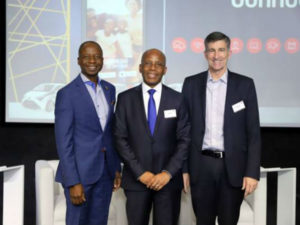 Automotive manufacturer, Toyota has partnered with Altron Netstar and Vodacom to roll-out connectivity features and in-car Wi-Fi on all new Toyota and Lexus models the company announced at a press briefing on Thursday, 29 August.

The new connectivity hub, Toyota Connect will be housed within the MyToyota App which was launched in 2014. It will allow Toyota owners access to a myriad of convenience, connectivity and safety benefits.

According to Toyota South Africa Motors, the company is the first in the world to offer the convergence of Wi-Fi and connectivity features in one package across the model range.

“As of 01 September 2019, all-new Toyota and Lexus models sold in South Africa will come standard with in-car Wi-Fi including 15GB free data (which you can top up) as well as a host of connectivity features and benefits courtesy of Toyota Connect, a major extension of the MyToyota App,” says President and CEO of TSAM, Andrew Kirby.

“The importance of telematics and telecommunications in tomorrow’s vehicles cannot be overstated – hence our partnership with global technology group Altron (through Netstar) and telecoms giant Vodacom in this project,” said Kirby.

Vodacom’s partnership with Altron Netstar and Toyota is the first step towards a more connected future, where autonomous cars will become a reality.

William Mzimba, Chief Officer at Vodacom Business says: “This partnership is a key part of Vodacom’s IoT strategy, and is a step closer to realising our ambition to create opportunities for innovation in South Africa as well as the broader continent, bolstered by growth in IoT. Just like smartphones, cars today will need to be connected to provide a dynamic user experience. We’re witnessing an increasing number of car buyers ranking in-car technology as important as vehicle performance. They want their cars to be safe, efficient, better equipped and fun. By connecting people to platforms that will manage the complexity of streaming music from the cloud, real-time traffic information and personalised roadside assistance, we can meet these growing demands.”

Through its subsidiary, Netstar, Altron jointly designed and developed the bespoke technology platform with Toyota, which enables Internet of Things (IoT) aspects such as telematics and fleet management. Altron Group Chief Executive Mteto Nyati says: “This locally-developed technology enables connectivity and gives real-time data to both Toyota and its customers. It positions Altron and South Africa as relevant players in the internet of things globally. We are truly excited about this collaboration.”

“Once a customer has opted-in, the data aggregated from the telematics module will provide insights to Toyota, their dealer network, customers, fleet owners and third-party service providers such as the Automobile Association (AA), providing accident and breakdown assistance,” says Nyati.