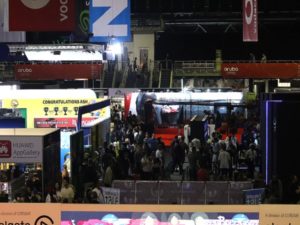 South Africa’s annual gaming expo rAge took place from 27 September to 29 September 2019 at the Ticketpro Dome in Johannesburg, South Africa. This year’s convention saw South African telecommunications company Vodacom partnering with rAge, which is said to be one of the biggest investments in the South African gaming and esports scene to date. Vodacom rAge 2019 showcased South Africa’s growing esports scene and cosplay community, although the lack of upcoming and anticipated games was noticed by attendees.

Vodacom rAge was jam-packed with game competitions and panel discussions. Each day was filled with exciting and valuable discussions, presentations and product demonstrations. There were different stages spread out around the Ticketpro Dome that accommodated different events, such as esports and cosplay. The first day of Vodacom rAge, Friday 27 September 2019, saw numerous giveaways held by different companies such as Apex International, Matrix: Warehouse, Vodacom, Takealot and many more on the main stage.

Doors to the convention opened at 10 AM CEST, but the press were invited to attend a briefing held by MSI/Evetech. The main stage was home to many unique panels, events, and giveaways on the first day of rAge. The Animation School hosted a panel called Careers and Opportunities in Animation to educate attendees about their potential future in the animation industry. South African video game developer Cali4ways Games showed off their upcoming “Proudly South African” video game, Boet Fighter. Friday was an incredibly quiet day for Vodacom rAge, as it usually is every year. This year, however, may have seen lower attendees on Friday than in previous years.

Saturday 28 September was the busiest day for Vodacom rAge. The crowd was larger and exhibitors were incredibly busy trying to accommodate the huge Saturday crowd. Microsoft, on the main stage, discussed their suite of accessibility tools, as well as Minecraft for Education. Julia Robson, Esports Correspondent for Ginx Esports TV and Twitch streamer, hosted a panel entitled Life of a gamer. Attendees were also treated to live music from YFM DJ Legendary Crisp. A few panels from Friday were also held on Saturday, such as Cali4ways’ Boet Fighter and The Animation School.

Professional Esports tournaments took place all weekend, with attendees able to watch the ROG Invitational bracket matches on Saturday and Sunday, with the finals and prize-giving ceremony taking place on Sunday. Evetech hosted a number of gaming events and competitions that attendees could enter. Some of the games included Overwatch, League of Legends, Rocket League and many more. Attendees at the Evetech booth were also able to receive some video editing tips from FrankyB. The World Robot Olympiad (WRO) South Africa National 2019 competition took place on Friday and Saturday at Vodacom rAge 2019. Attendees were able to witness teams build their robots and battle it out in different competitions.

Vodacom rAge excelled with their giveaways, professional esports competitions, and cosplay events, but attendees could not help but feel that the convention lacked meaningful video game demos and presences by large video game companies such as Nintendo and Microsoft. The PlayStation booth at Vodacom rAge 2019 was the largest gaming booth at the convention, but it was also the exact booth that was present at Comic-Con Africa 2019, save for the video game Predator: Hunting Grounds. Microsoft was relegated to a tiny corner of the convention, with demos of NBA 2K20 and Gears 5 present. Nintendo, which had a huge presence at Comic-Con Africa 2019, was nowhere to be seen at Vodacom rAge 2019. Attendees who showed up just to get their hands on the latest and exclusive video games were left feeling disappointed, as they had seen and done everything there was just on the first day alone.

Vodacom rAge 2019 was a fun experience for gamers, technology enthusiasts, cosplay fans and esports fans alike, although attendees who showed up just to play the latest and upcoming game releases were left a little high and dry. With such a huge gaming presence at Comic-Con Africa 2019, a convention whose main focus is not even video games, attendees were left wondering why there was little in terms of upcoming game releases, even compared to previous rAge expos. There was also little in terms of artists and merchandise areas. Vodacom rAge 2019, despite this, excelled in giving attendees numerous chances to walk away with prizes and even enter various gaming competitions to show off their skills. The convention, as a whole, was a fun experience, although it was mired by a lack of meaningful video game demos and artists and merchandise booths.

Images from Vodacom rAge 2019 are featured below: