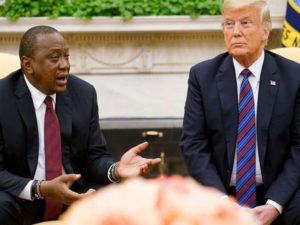 The United States is set to reduce aid funds given to Kenya by more than 50 percent in the 2020 financial year that begins in October.

President Donald Trump’s proposed budget issued on Monday calls for deep cuts in aid to Kenya as part of an overall rollback in US funding for many Africa-focused programmes.

Support for development initiatives in Kenya will fall from the USD102 million provided in 2018 to USD43.5 million in accordance with Mr Trump’s spending plan for the 2020 US fiscal year that begins next October.

A similar reduction of more than 50 percent is sought in US economic and development assistance for sub-Saharan Africa as a whole. It will plummet from USD1.5 billion approved by Congress for 2018 to USD665 million in 2020.
In its State Department budget proposal issued on Monday, the White House justifies these cuts as ways of “reducing dependency on US assistance and increasing self-sufficiency” on the part of African nations.

Touting the “Prosper Africa” plan it outlined in December, the Trump administration says it wants to “fundamentally transform the nature of our bilateral relationship with these countries from an aid-based focus to true trade partnership.”

Health programmes in Kenya overseen by the US Agency for International Development would be allocated $54 million in the coming year, compared to $82 million appropriated in 2018.

Even steeper reductions would be made in the HIV/Aids programme known as President’s Emergency Programme for Aids Relief (Pepfar) that has saved hundreds of thousands of lives in Kenya. Mr Trump wants to allocate $276 million for this State Department-administered effort in Kenya, compared to $441 million the US spent in 2018.