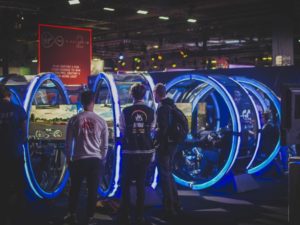 Telkom VS Gaming is said to be the largest esports league in Africa. This league will host the VS Gaming Masters which includes video games such as DoTA 2 and Counter-Strike: Global Offensive (CS: GO). “The world of gaming, and esports respectively, is rapidly growing in Africa and platforms like Telkom VS gaming play an important role in facilitating the movement with tournaments that give gamers the opportunity to connect with each other”, said Wanda Mkhize Executive, Content for Telkom VS Gaming.

Esport was included for the first time globally at first-ever Comic-Con Africa last year. In addition to the esports tournaments, attendees at Comic-Con Africa will be able to experience a wide range of activities including Cosplay Competitions and panels hosted by artists and video game developers. Local guests include South African artists Warren Louw, Simangaliso Sibaya and many more. Internation Cosplayers include Leeanna Vamp and Leon Chiro. International guests include actors Anthony Mackie, Daniel Gillies and William Shatner. Video game voice actors Troy Baker and Nolan North will be hosting panels at the event, as well as their YouTube series, Retro Replay.