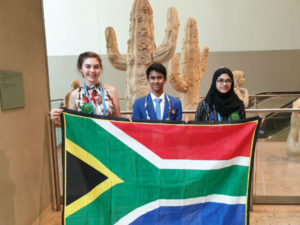 The big local winner was Hritik Mitha from Bryanston High School in Johannesburg, who won the USAID Second Place Award for innovation and development in the Energy and Water category. The award consisted of a cash prize of USD$3,000 prize money.

“I am happy that over a year of hard work, dedication and resilience to complete the project was recognised as worthy to win an award by an international society at Intel ISEF. It was a dream come true, and the fact that I won this award despite the hardships I faced in the past, including multiple failures, really made me proud of the resilience I maintained throughout my Eskom Expo for Young Scientists journey to get to Intel ISEF,” says Mitha.

“The USAID special award I won stated that my project displayed innovation that had the potential to benefit the world. I, therefore, feel as if it would be an injustice not to do my best to execute the project on a larger scale. After experiencing the Eskom Expo International Science Fair last year and Intel ISEF this year at this junior level, I most certainly want to use my new skills and knowledge at a higher level,” Mitha adds.

Other local winners included Runè Edeling from Eunice High School in the Free State and Shaziyah Laher from Nizamiye Al Azhar Institute in the Eastern Cape.

Edeling won the fourth award of USD$500 in the Physics and Astronomy category for her project, “Using simple technology to optimise the aerodynamics of heavy motor vehicles. The project investigates how golf-ball style dents or dimples applied on certain areas of the bodywork of a heavy truck vehicle can be used to decrease the aerodynamic drag for the purpose of increasing fuel efficiency and cost-effectiveness.

Laher also won the fourth award of USD$500 in the Chemistry category for her project, “Organic biodegradable alternative to plastic”. The project investigated a more efficient way of making and disposing of plastic that is less harmful towards humans, animals and the environment. The results of the experiment produced a transparent, strong, biodegradable polymer.

Parthy Chetty, Eskom Expo Executive Director says: “Simply making it to Intel ISEF is a major achievement for these learners. Winning at ISEF is about the best you can achieve on the international stage. Eskom Expo continues to provide this unique platform for our young scientists to pursue their dreams and we help them make their dreams a reality.”

Intel ISEF featured more than 1 800 of the top science and engineering high school students from 80 countries and regions around the world who competed for an array of awards in every major science and engineering category. The three South African winners were top achievers who were selected to participate in Intel ISEF following last October’s Eskom Expo for Young Scientists International Science Fair (ISF) – which is the only official platform for young scientists in South Africa to pursue their passion in science.