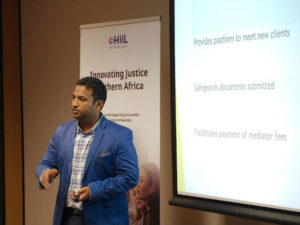 The Hague Institute for Innovation of Law (HiiL) and global law firm, Baker McKenzie have announced the winners of the South African leg of Global Legal Hackathon 2019 (GLH2019).

Over the course of the weekend, 22-24 February, teams in 46 cities in 24 countries around the world took part in the world’s largest legal hackathon. More than 6,000 participants came together to address issues relating to access to justice and the business of law.

“The work that the teams showed us on Sunday evening was by far the most consistently impressive that I’ve ever seen at an event of this kind,” said HiiL’s Adam Oxford, “It’s exciting to see so many well-developed ideas emerging so fast.”

The top winners of the South African event were:

An online mediation platform that provides a cost-effective and fast alternative to lengthy court processes for civil disputes. Kagiso uses machine learning to match cases with professional mediators who have the most relevant skill sets to be effective – such as subject matter experience or knowledge of local languages – and stores records using blockchain technology.

Bua is a voice-recognition system that allows victims of crime to record their own statements in their own language in a private “safe space” such as a kiosk or on their own phone. The majority of crimes in South Africa’s go unreported or prosecutions fail, and a leading reason is that victims don’t feel comfortable giving statements in open police stations, and statements are often badly or wilfully mistranslated.

O Kae Molao is a local language TV show which speaks directly to poor communities around South Africa and offers legal advice and help with issues. The interactive element of the show will feature an SMS helpline where viewers can request help from pro bono lawyers associated with the show.

The winners of the event, Kagiso, will progress to the second round of the contest, in which a panel of international judges will decide who attends a grand final in New York.

“We were extremely impressed with the variety of innovative ideas presented at the Hackathon and we are sure Kagiso’s ideas will impress the judges in the next round.

“There is no doubt that the ways in which law firms deliver their services are changing and law firms are becoming increasingly innovative as they adapt to client needs. The rapid advancements in tools, technology and ways of working, constitute a huge opportunity for law firms to change their service delivery models in innovative ways. Events such as the Hackathon are the perfect breeding ground for these new ideas, and it was exciting to witness some of the innovative solutions that will change the future of law,” says Darryl Bernstein, Partner and Head of the Dispute Resolution Practice at Baker McKenzie in Johannesburg.

Additional prizes consisting of a ticket to the Legal Innovation and Tech Fest, which takes place in Sandton in June, and a place on the Futures Law Faculty Legal Tech Short Course, were presented to the top two teams from South Africa by tax consultancy AJM and legal outsourcing specialist Exigent.

All the participants are encouraged to enter HiiL’s international Innovating Justice Challenge, which will open for applications later this year.