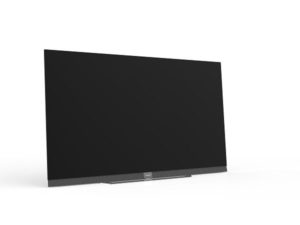 SKYWORTH launched their range of Artificially Intelligent (AI) TVs on 16 May 2019 in South Africa.

SKYWORTH’S new AI TV offerings can be controlled solely by the user’s voice. “The AI TV range supports both Google Assistant and other smart home devices such as Amazon Alexa, turning your TV into your home’s control centre,” explains Joubert.

You can now, literally, converse with your television. The new range of AI TVs launched at the conference include the S9: OLED TV, Q3C: UHD TV, Q20: UHD TV, and the E20: FHD TV and KTV (Karaoke TV).

“Our AI TVs will ‘wake up’ in response to voice command and respond to commands to adjust the volume or answer a general question. Whereas Google Assistant can tell you the weather on any given day, now with Amazon Alexa compatibility it’s taken it that one step further… ‘Amazon Alexa what is the weather going to be today? Well, you should probably take a jumper with you, it’s going to get a little chilly later.’ It’s the personalisation of the product that is incomparable to anything else on the market.”

With a powerful built-in PQ (Performance Qualification) Processor, the TV can display the best image and create an extraordinary experience for audience. SKYWORTH’s partnerships with Google, Amazon, and other technology giants have allowed the brand to establish the intelligent product ecosystem we see today.

The spectacular S9 OLED TV was highlighted as SKYWORTH’s flagship product at the conference, and it’s easy to see why. “The S9 can only be described as turning imagination into reality,” says Joubert.

“OLED technology marks a vast improvement on older, flat panel displays like LEDs or LCDs, that rely heavily on backlights to illuminate their screens. In contrast, OLED TVs don’t require lights behind the pixels because these are able to light up on their own individually and, in turn, switch off completely when they’re supposed to appear black.”

One of the S9 features that really created a buzz amongst the crowd is the Chameleon AI PQ Extreme. Joubert explains it as, “A picture quality improvement technology based on the PQ chip. It uses AI technology to search, recognise and reconstruct image objects, therefore improving the picture quality precisely.” Chameleon AI PQ Extreme analyses object details based on AI algorithm and adjusts colour performance, particularly red, blue and green, in real time. This means that each pixel can perform at its most accurate and purest colour.

The S9 emits a blue-light from the screens over time, cause eye problems such as retinal injury, myopia and cataracts. However, OLED doesn’t need backlight, thereby minimising the harm of blue-light hazard and making it the best choice for your family, especially the little ones.