Samsung has showcased its second foldable device – the Galaxy Bloom – during a ‘secret’ meeting held at the CES 2020 conference. According to TechRadar, ‘Galaxy Bloom’ was originally considered a codename, but now it “will actually be the device’s go-to-market name, and not Galaxy Fold 2 as originally speculated”. 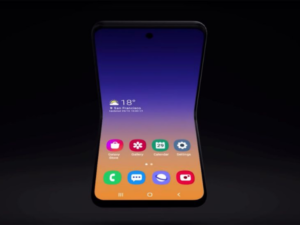 The smartphone manufacturer first hinted at the latest clam form factor device in a concept video released at the end of 2019 – and now it would seem that the Bloom is getting ready to flood the market. And although there’s been no word on exactly when it’ll be available, Samsung is expected to officially launch the device at its Unpacked event on Tuesday, 11 February.

Most surprisingly, it’s reported that Samsung has opted for a new kind of screen technology in the form of Ultra-Thin Glass (UTG) as opposed to the plastic material used for the original Galaxy Fold screen.

“Samsung CEO, DJ Koh explained to attendees that the company drew inspiration for the Galaxy Bloom’s design from French cosmetics company Lancôme, which is famous for its clamshell-style powder compact cases” – making it a familiar and comfortable design for young female users, reports SamMobile.

“The company will be going after a different demographic with this product. It’s planning to aggressively target women in their 20s which is why the product has a design that will feel familiar to them.”