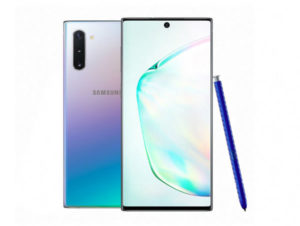 The Galaxy Note10 integrates Link to Windows directly into the Quick Panel. With one click, users can connect to their Windows 10 PC.

Samsung launched the Galaxy Note 10 on Wednesday, 07 August and for the first time ever, the Galaxy Note10 comes in two sizes, so consumers can find the Note that’s best for them.

The Galaxy Note10 opens up the Note to users who want the power of the S Pen and ultimate productivity in a compact form factor, packing a 6.3-inch Cinematic Infinity Display into the most compact Note yet. The Galaxy Note10+ features the biggest Note display ever with a 6.8-inch Cinematic Infinity Display on a device that’s still easy to hold and easy to use.

The Galaxy Note10’s edge-to-edge Cinematic Infinity Display is nearly bezel-less, while the in-display cut out for the front camera is small and centred for a balanced design. Samsung’s most immersive display creates a seamless experience between thought and action, viewing and creating.

New and improved S Pen
With the S Pen, users can now jot down notes, instantly convert their handwriting to digital text in Samsung Notes, and export it to a variety of different formats, including Microsoft Word. Users can also customise notes by shrinking, enlarging, or changing the colour of the text. In just a few taps, meeting minutes can be formatted and shared; bursts of inspiration can quickly become editable documents.

Evolution of the S Pen
The Galaxy Note10 builds on the Bluetooth Low Energy-enabled S Pen capabilities introduced on the Galaxy Note9 by adding Air actions, allowing you to control certain aspects of the device using gestures with the S Pen. By opening up the Air actions SDK, developers can create customised controls that give users the ability to play games or use their favourite applications using gestures.

Camera and video
Another interesting feature is the Live focus video. This feature adds depth-of-field adjustments so you can blur the background to focus on your subject. Zoom-In Mic amplifies the audio in frame and pushes background noise aside to help focus on the sounds that you want. And to remove the bumps and shakes that usually make an action shot blurry, new and improved Super steady stabilises footage, and is now available in Hyperlapse mode for steady time-lapse videos.

Galaxy Note10 users can edit-on-the-go right from their phone. The video editor can be used with the S Pen, so instead of having to tap to select or edit a clip, users can choose the precise moment they want to trim. For creators who need even more control over their footage, Adobe Rush1 on the Galaxy Note10 provides a sophisticated suite of editing tools, now even more accurate with the S Pen.

The Galaxy Note10 features Super-Fast Charging and Wireless PowerShare which means that users can wirelessly recharge their Galaxy Watch, Galaxy Buds, or another Qi-enabled device with the Galaxy Note10.