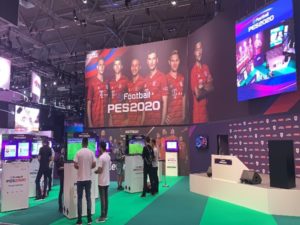 Konami announced this new deal on the official PES Twitter page, saying: “It’s a big one… UEFA EURO 2020 is coming to [PES 2020]! We are partnering with UEFA to bring PES fans the opportunity to experience the FULLY LICENSED tournament through an update pack coming in Spring 2020. But that’s not all… With this UEFA partnership, we will be the official game used for the brand new eEURO 2020 esports tournament!”

Konami is currently giving fans at Gamescom, an annual games convention currently taking place in Cologne, Germany, a chance to get their hands on the game. In addition to this, the EURO 2020 trophy is on display at the PES booth at Gamescom. Konami announced that the EURO 2020 tournament will be added to PES 2020 sometime in 2020 as an update pack. The pack will include each team’s kits, the tournament’s official ball and the ‘hosting stadium.’ According to VGR, EURO 2020 will be the 16th competition and 2020 will also mark UEFA EURO’s 60th birthday. Konami also announced that the EURO 2020 DLC pack will be free for all PES 2020 owners.

This announcement comes after Konami announced that it had signed an exclusivity deal with Juventus football club. This announcement took fans and reviewers alike by surprise, as EA’s football simulator FIFA had always had the rights to all major football clubs and tournaments. These exclusivity deals can be seen as a strategy by Konami to get more FIFA players to purchase PES 2020. Konami also has partnership agreements with the football clubs FC Bayern, Manchester United and Barcelona, and players from these teams will appear on the cover of PES 2020.

Pro Evolution Soccer 2020 is currently set for release on 10 September 2020 for Windows PC via the online game store Steam, Xbox One and PlayStation 4.