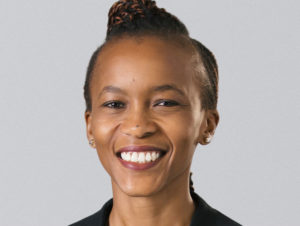 Buhle Goslar has been appointed as JUMO Africa CEO.

Tech company, JUMO has appointed Buhle Goslar and Ashish Desai as Africa CEO and India CEO respectively. The appointments come as part of a new organisational structure to support JUMO’s expansion into new markets in Africa and Asia.

Goslar, who previously held the role of Chief Customer and Sustainability Officer at JUMO, will oversee the company’s business in its African markets including Ghana, Kenya, Tanzania, Uganda and Zambia. Based out of the Cape Town operational hub, she will also focus on strategic partnerships in new markets on the continent. Prior to joining JUMO Goslar worked as Head of Product at Woolworths Financial Services and held senior marketing roles at Barclays and Investec.

“I look forward to building on the solid base we have achieved in five African countries, and not only widening our reach geographically but also deepening our services for entrepreneurs and MSMEs. To do this, we’ll continue our close relationships with new and existing partners and other stakeholders, united around the ambition to drive financial inclusion and boost economic growth where it matters,” said Goslar.

The newly created role of India CEO comes after JUMO opened two new offices in Mumbai and Delhi earlier this year to support its expansion in India. Desai is a former director at Cedar Consulting, and General Manager: Mobile Financial Services for Mahindra Comviva (then Bhartitelesot). Most recently he was the Joint President and Business Head at Aditya Birla Idea Payments Bank where he managed partnerships and alliances and spearheaded thought leadership on fintech regulation and policy.

“India is at a pivotal moment to harness the collective forces driving financial inclusion in the country and unlock them with JUMO’s proven technology. Using AI and big data to create value from people’s digital footprints and behavioural data, we can match financial services with individuals’ needs and help them achieve their aspirations for themselves, their families and their communities,” said Desai.

Brian Tait has been appointed as Interim CEO for Asia (excluding India) as JUMO recruits for the new role. The new regional CEOs will report to JUMO founder Andrew Watkins-Ball as Group CEO.

Watkins-Ball said: “As our business grows into new markets, we have the ability to scale our technology and data analytics capability to reach even more entrepreneurs and enable greater access to financial services across the world. I’m proud to have this calibre of leadership driving the next chapter in our journey to become a truly global technology company for building and running financial services.”