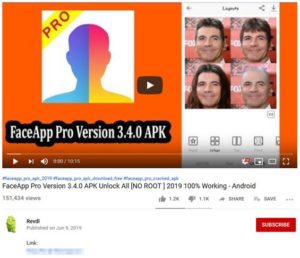 A YouTube video claiming to offer a link for downloading the installation package (APK) for a “FaceApp Pro” application for Android.

The past week has seen a craze around a mobile app that uses neural network technology to automatically generate highly realistic transformations of faces in photographs. Developed by Russian company Wireless Lab, FaceApp, as it is known, has been around since 2017 but recently gained popularity and went viral with millions of people downloading it. The app also garnered negative responses from some people.

Here are a few tips on what to look out for if you want to download the app:

How the Fake App works
Research by ESET revealed that the FaceApp application has attracted scammers who want to make some quick profits. ESET says that scammers have been using a fake “Pro” version of the application as bait and have made an effort to spread the word about this fictitious version of the currently- viral app.

One form of the scam uses a fake website that claims to offer a premium version of FaceApp. In reality, the scammers trick their victims to click through countless offers for installing other paid apps and subscriptions, ads, surveys and so on.

The second type of scam includes YouTube videos again promoting download links for a “Pro” version. One of the fraudulent YouTube videos had over 150,000 views at the time of writing this research.

The victim also receives requests from various websites to allow the display of notifications. When enabled, these notifications lead to further fraudulent offers. The YouTube videos contain download links that point to apps whose only functionality is to make users install various additional apps. The shortened links could lead to users installing malware as well.

Real vs Fake
The legitimate FaceApp application offers various face-modifying filters and is available for both Android and iOS. While the app itself is free, some features marked as “PRO”, are paid. Along with the viral potential of its popular filters, FaceApp has of late, generated a huge wave of media attention amid concerns about online privacy.

“Only one of the YouTube videos we found had more than 150-thousand views, however, its malicious links were clicked over 90-thousand times,” says ESET Researcher Lukáš Štefanko. “Legitimate businesses don’t even dream of such high click-through rates as these cybercriminals have been able to achieve,” he opines.

Before joining the hype, users are warned to stick with basic security principles. Regardless of how exciting the ‘opportunity’ seems, avoid downloading apps from sources other than official app stores, and examine available information about the app (developer, rating, reviews, etc.). As insurance in cases where the user falls victim to a scam, having a reputable security app installed on a mobile device can help prevent some negative consequences.

« BMW announces new Chairman of the Board of Management