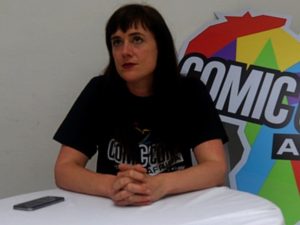 In the days and months leading up to Comic-Con Africa 2019, the convention was marketed as extensively as possible to generate enough buzz and excitement to ensure that as many people as possible attended the Pop-Culture event. IT News Africa’s Kojo Essah was in attendance at Comic-Con Africa which took place from 21 September to 24 September 2019 at the Gallagher Convention Centre. Kojo was able to interview Clair Wright, Marketing Manager for Comic-Con Afric at Reed Exhibitions, to discuss what goes into marketing an event like Comic-Con Africa.

One of Comic-Con Africa 2019’s main partners is KFC. What was the rationale behind this partnership?

KFC took a different stance to marketing with us. They wanted to be fully integrated as opposed to just a brand slap. They wanted to be our ‘Wingman,’ which was fantastic, and that’s the way they positioned themselves. We agreed that when you support each other you see far more dividends than if you just take over. They’ve integrated with their Colonel superhero character, and everything they’ve done is to complement the event as opposed to take over the event. This has been fantastic for us and having a sponsor like KFC has enabled us to really achieve so many more goals because we’ve got the backing of this giant brand.

Comic-Con Afra had its inaugural event in 2018. Did having a previous event make it easier to plan and market this event?

Yes and no. What was fantastic about last year is that we got a lot of feedback. It was an unprecedented success, the first year. It was really amazing. We completely shot all our numbers through the roof. What was so valuable about last year is that we got feedback we could work on for this year. For example, the gamers felt they saw a bit too much cosplay, the cosplayers felt there was too much gaming, and so we were able, this year, to take the feedback and find a venue where we could answer all those questions. Now, the gamers have their own hall, pop-culture has got its own hall, Artists Alley has got its own hall. We feel like we’ve answered all the problems from last year. The second-year is always the toughest one. I think, maybe, you lose out on that initial thrust of novelty, but I think we’ve done really well this year. It’s enabled us to be bigger and better, and it was a great platform to launch the second one off of because there was such interest and such enthusiasm. People loved the first year so much, and it inspired us and gave us the energy to keep going this year.

From a marketing perspective, how difficult was the process to book international guests?

Some of the challenges we faced is that firstly, we are further away than other countries, so in terms of conventions in America, the guests can catch a short flight from where they are to the convention. For us, there is always a layover and the time it takes to travel to us can take up to two days. Secondly, we’ve got the Dollar – Rand exchange rate which makes things a bit tough. A lot of people are just out of the market for us, really. Also, we can’t have, say, 90 guests. New York Comic-Con [for example], you maybe have 90 guests and people frequently cancel. Maybe 10-20% might turn over, but because we are only able to get a few [guests] when we cancel one it’s much more of a big deal than if you cancel 15 at New York Comic-Con. It’s also a different mix for us in South Africa. Because we don’t have as much access to all of those people, we have to kind of answer what everyone needs with just the few guests that we have. We can’t have Harry Potter [guests] just for the Harry Potter fans. We have to answer everyone’s needs all in one go.

How do you balance both international and local guests when it comes to marketing the convention?

Yes, our unique selling point, you could say, would be the [international] film and TV series actors. That is what a lot of people look to us for. They look to us for these big names that you perhaps don’t get at the other pop-culture conventions, but I think that is not only what Comic-Con [Africa] is about. The Artists Alley has tripled in size this year, which is absolutely incredible. Our comic book illustrator and author lineup is so much stronger this year, I mean it is absolutely a fantastic lineup. We’ve also had a lot more on the go with cosplay. The workshops have been fantastic this year, from wig workshops up to concept and creation, like from beginning to end of how you make your cosplay. We put a lot of effort into developing the communities and I think we’ve seen dividends. It’s very important to us that we listen to the fans. We don’t make this convention for ourselves. We make this convention for the people that want to attend this convention, and that’s why we look to influencers in [different] areas like LARP-ing (Live-Action Role-Playing) and cosplay. We look to people who know the fandoms and we ask them for advice and direction so that we can give the fans what they want most, more than anything else.

Comic-Con Cape Town is set to take place from 1 May to 3 May 2020. What was the decision behind adding another location to Comic-Con Africa, and why Cape Town?

So Cape Town [Comic-Con] is going to be more animation focused while still having the film and TV series and all the other elements of pop-culture as well. We’ve actually integrated with the Cape Town International Animation Festival, and Cape Town is like a centre for filming and acting. So many of [South Africa’s] commercials are shot there. So many international films are shot there. It’s not so easy to travel to Comic-Con Africa in Johannesburg if you’re in Cape Town. Obviously all markets in South Africa matter to us. It’s important that Comic-Con is an experience that everyone in South Africa can enjoy, and also to be involved in the animation side of things is fantastic as well.