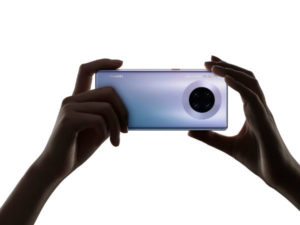 Huawei launched the Mate 30 Series at an exclusive launch event on Thursday, 20 September in Munich.

Multinational technology company, Huawei launched a host of products including their latest flagship smartphones at the global launch on Thursday, 19 September 2019.

With an ultra-narrow notch design and the thinnest of bezels, the Huawei Mate 30 Pro features the Huawei Horizon Display, which curves at an angle of 88 degrees to maximise the display area to provide an unparalleled, edge-to-edge immersive viewing experience.

The Mate 30 Pro introduces the Intuitive Side-touch Interaction feature to replace the side volume buttons with invisible virtual keys. The Huawei Mate 30 Series is powered by the Huawei Kirin 990 series chipset, Huawei’s most sophisticated smartphone chipset launched to date.

Huawei also unveiled its Mate 30 RS device in collaboration with Porsche Design, which is a luxury version of the Mate 30 Pro with a leather-backed chassis and a square rear camera module.

The Mate 30 is equipped with a SuperSensing Triple Camera, comprising a 40MP SuperSensing Camera, 16MP Ultra Wide-angle Camera and an 8MP Telephoto Camera, it is coupled with an ISP 5.0 Image Signal Processor.

On the other hand, the Mate 30 Pro sports a revolutionary quad-camera system with the 40MP Cine Camera, 40MP SuperSensing Camera, an 8MP Telephoto Camera and a 3D Depth Sensing Camera.

Huawei implemented its EMUI 10 operating system on its new smartphone.