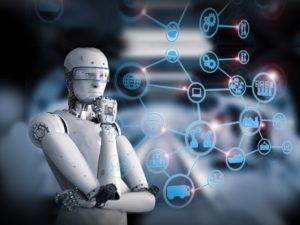 How automation is creating jobs.

Robot workers replacing human jobs – the debate of the decade. In reality, the opposite looks true. Recent research carried out by ManpowerGroup shows that more employers than ever – 87 per cent – plan to increase or maintain headcount as a result of automation for the third consecutive year.

Rather than reducing employment opportunities, organisations are investing in digital, shifting tasks to robots and creating jobs. At the same time, companies are scaling their up-skilling programs so that their human workforce can perform new and complementary roles to those done by machines. The Skills Revolution is in full flow.

“As the employment and work environment continues to evolve, employers have an important role to play in terms of creating a culture of learning and working to build talent. Automation is changing the way that organisations operate. Learnability needs to be encouraged and nurtured – not only for the sake of the employee but for the sake of each and every organisation operating in the modern world,” explains ManpowerGroup South Africa’s managing director, Lyndy van den Barselaar.

In it’s 2019 research paper titled “Humans Wanted: Robots Need You” which focuses on the Skills Revolution, ManpowerGroup asked 19 000 employers in 44 countries about: the impact of automation on job growth in their organisations in the next two years; the functions they plan to increase headcount the most, and the types of skills they are looking for, and the talent strategies they are implementing to ensure a future-fit workforce – and the results are nothing short of fascinating.

Automation Is Creating Jobs – And The Trend Is Set To Stay

More employers than ever anticipate increasing or maintaining their workforce as a result of automation – up from 83 per cent to 87 per cent in three years. At the same time, the share of companies predicting job losses has fallen from 12 per cent to 9 per cent.

In terms of South African employers, the results show that between 21 per cent and 30 per cent of South African and Guatemalan employers are planning to increase their headcount as a result of automation. In America’s 28 per cent of companies expect an increase in headcount, while two-thirds of EMEA employers anticipate no change. Only Bulgaria, Hungary, Czech Republic, Norway, Slovakia and Romania predict a decrease in headcount.

“This proves that despite popular belief, the modern workforce does not have to be humans versus machines – however, it is important that employees are able to find a balance and collaborate with new technology to achieve the best possible outcomes,” says van den Barselaar.

Organisations That Are Automating Most Are Creating The Most Jobs

Companies that are innovating are growing, and that growth is producing more and new kinds of jobs. Those organisations that are already automating tasks and progressing in their digital transformations are also most confident of increasing headcounts. Twenty-four per cent of those companies say they expect to create more jobs in the next two years. Only 12 per cent of those that are automating say they will reduce headcount, while 3 per cent are not sure what the future holds.

Upskilling Is On The Up

With talent shortages at a 12-year high and new skills appearing as quickly as old ones disappear, more companies are planning to build talent than ever before, and this is projected to increase by 2020. Companies are realising they can no longer expect to find just-in-time talent, on tap. Eighty-four per cent of organisations expect to be upskilling their workforce by 2020.

“With the lifespan of skills shorter than ever, learnability is becoming the new ‘must have’ trait for employees to have – that is the ability and desire to grow and adapt one’s skillset to stay employable for the long term,” explains van den Barselaar. “In order for any organisation to succeed, they need to play their part in creating a culture of learnability amongst their employees, and employees need to recognise the importance of up-skilling to stay relevant and employable. This is certainly ahead of experience in terms of desirable characteristics.”

The report found that confidence in automation is growing, globally. In 35 of 44 participating countries, it was found that more companies are planning to grow or maintain rather than shrink their workforce. Robots are helping to boost productivity and proving to be critical to economic growth. Failure to invest in automation risks missing out on creating wealth and jobs.

Yet countries and regions are adopting robots at vastly different rates: For example, Southeast Asia is outperforming Europe and North America, and China is outpacing the U.S.

Demand For Digital Skills Is Growing

Automation is changing the skills companies need from workers, yet the speed with which this is happening across functions within organisations varies.

Demand for IT skills is growing significantly and with speed: 16 per cent of companies expect to increase headcount in IT – five times more than expect a decrease. Meanwhile, the availability of tech talent is increasingly scarce, and the education and experience employers require versus what exists is presenting a mismatch.

Manufacturing and production anticipate the most change: 25 per cent of employers say they will employ more people in the near-term while another 20 per cent say they will employ fewer – resulting in job growth together with significant skills disruption in the industry. Growth will come too in frontline and customer facing, engineering, and management roles, all of which require human skills such as advanced communication, negotiation, leadership, management and adaptability. In other functions, administrative and office roles are shrinking and overall HR headcount is expected to stay the same.

Human Skills Are Hard To Find And Even Harder To Teach

Demand for tech and digital skills is growing across all functions yet employers place increasing value on human skills as automation scales and machines prove better at routine tasks. While 38% of organisations say it is difficult to train in-demand technical skills, 43 per cent said it is even harder to teach the soft skills they need such as analytical thinking and communication.

Candidates who can demonstrate higher cognitive skills, creativity and the ability to process complex information, together with adaptability and likeability, can expect greater success throughout their careers. By 2030, demand for human skills – social and emotional soft skills – will grow across all industries by 26% in the U.S. and by 22% in Europe.

“The Skills Revolution is not only about building hard and technical skills, but relies heavily on soft skills – which is good news for employees and job seekers since these kinds of skills can often be learned and nurtured.” Explains van den Barselaar.

“The Skills Revolution is essentially centred around up-skilling, and both employers and employees need to ensure they are focusing and prioritising this in order to succeed,” she concludes.