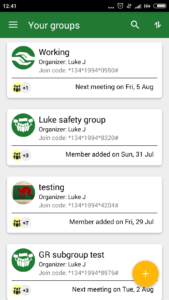 Grassroot was founded in late 2015 and has reached over half a million people to date.

Grassroot, a Johannesburg based NGO enables communities on the ground to effect participatory democracy through technology.

Explaining the inspiration behind the inception of the NGO, the Co-Founder Luke Jordan of Grassroot said, “Prior to Grassroot, if someone wanted to call a community gathering they had to hire a guy to go around on a bakkie the whole morning with a megaphone telling people about the meeting. A chat group wouldn’t work because still about half of people in informal settlements don’t have smartphones, or are usually out of data, and chat groups have size limits. So either you exclude people or you have to incur the costs of the bakkie and the fuel and so on, and still if someone isn’t home when the bakkie drives past, they won’t know about the meeting.

Founded in late 2015, the organisation also provide other NGOs and partners the ability to reach audiences otherwise left out of the national conversation.

“We have helped the Big Debate run polls during its shows this season over USSD, allowing people not on social media to have their opinion counted, and worked with Health-E News to provide information on local clinics and support services to survivors of gender-based violence who might not have smartphones or data, said Jordan.

Grassroot was born in the AWS cloud. At the core of the application are Amazon EC2 and Amazon RDS stack providing the necessary storage power. Increasingly over the last year, they have also been moving over to fully managed and serverless services. To do this they use AWS Lambda and Amazon Dynamo DB. Ultimately the cloud has enabled ordinary citizens to be more participative in the state.

The NGO has a footprint in all 9 provinces and a large concentration of users in Gauteng, from multiple communities around Soweto up to Ivory Park and Mamelodi and in the East Rand.

Jordan said, “A community in the Ivory Park /Tembisa area used our tools to organize themselves and define community priorities, in this case to raise funds themselves to install flushing toilets (they only had pit toilets).  They also used our app to help them with the basic organisational work required to do that – lots of meetings, notes of actions taken, etc. – our field team helped them create a crowdfunding campaign (using Thundafund) and our app to send a mini press alert about it.”

Grassroot has a platform that enables users to issue alerts about events occurring in their community. Community member post description of their grievances and an image on LiveWire, after review, the alerts are sent to news desks and listed on the platform, forming a news feed of ground-level activity in South Africa’s communities.