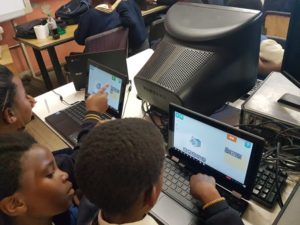 “The world is changing at an amazing pace and many of our kids risk being left behind. We decided to create a platform that would give kids hope for the possibilities of what coding, literacy and learning can bring to their lives. And with the support of our community partners as well as SAP and Google as part of Africa Code Week, this year helped us take a big stride toward realising that vision, ” says Fundanii co-founder Sinovuyo Apelani.

Fundanii is a digital learning outreach program that was established by Sinovuyo Apleni and Luthando Gubevu in 2016. Based near East London in South Africa’s second-most populous township, Mdantsane, Fundanii aims to educate pupils in surrounding schools in computer literacy while creating employment opportunities for those that have an interest in software development, IT and literacy. “Luthando had previously worked with a local foundation which opened doors to community schools, their principals and teachers. We approached four schools in the area and offered to trial coding workshops with around 1200 pupils.”

The team’s work with schools in the surrounding area ultimately brought it into contact with Megan Skelly, a computer teacher at Hudson Park Primary School. “Megan introduced us to the SAP-led Africa Code Week initiative and we immediately identified with its vision and purpose. We had witnessed how fast the world was changing and how much Mdantsane was stuck, unable to provide opportunities for its youth for meaningful participation in the digital economy. We joined forces with Megan and her team this year and helped to provide coding classes to 250 learners at the Gcobani Senior Primary and Mkululeko Senior Primary schools.”

Skelly also nominated Fundanii for a Google Micro Grant. Google has been joining forces with SAP to support Africa Code Week for the past three years as part of its own efforts to prepare 10 million people in Africa for tomorrow’s workplace. Fundanii is one of 53 non-profit organisations supported by Google in 2018 through its micro grants.

Sinuvuyo and Luthando used the funds received via the grant to build the Fundanii Stories website, a digital storytelling platform for kids and children’s authors. “Storytelling is an integral part of Xhosa culture and part of the daily rhythm of Mdantsane. But we’ve seen a recent decrease in interest in literature; even one of our libraries have closed down, leaving the entire area of Mdantsane with a single library for its more than 150 000 residents.”

Fundanii Stories provides learners with a workbook that they complete, and which encourages them to develop even a basic storyline. “Luthando also hosts workshops with the pupils to introduce them to PCs – which many of them would never have used before – and shows them the basics of navigating the Windows operating system and Office suite. Kids are quizzed and their workbooks are marked: top-performing pupils, generally those with grades of 85% or higher, are then taken into more comprehensive coaching. We also animate the best stories and load them onto the new Fundanii Stories website where anyone can access them. It’s our wish that Fundanii Stories becomes a global platform for authentic children’s storytelling, to inspire a new generation of youth to have a passion for literacy – both for the written word and for coding.”

Asked about the difference between writing and coding, Sinovuyo insists they’re one and the same. “Coding is writing: whether you’re writing and app or a book, you need to get the spelling and grammar correct. One small mistake could ruin the whole book – or app. We are now working to release an app on the Google Play Store next year to ease the process of submitting stories and to open the initiative up to a global market. We’re also hoping to partner with the Department of Education to roll out Fundanii Stories to schools across South Africa to spread the love for literacy, storytelling and coding across the country, and to assist with the printing of the workbooks, which we currently sell to local schools at a loss to ensure as many youth as possible get an opportunity to participate in this new digital economy.”

According to Sunil Geness, Project Lead for Africa Code Week at SAP Africa, the work that Sinovuyo and Luthando has done has created lasting impact in their community. “Africa Code Week is built on the principle of building sustainable local capacity for digital skills development among African youth. As the global economy and future jobs shift ever more into the digital realm, it is critical to get our youth excited and inspired to become active participants in the 21st century digital economy. We also commend our partners at Google for recognising the importance of Fundanii’s work in Mdantsane, and we look forward to seeing how their important work continues to grow across our country and beyond.”