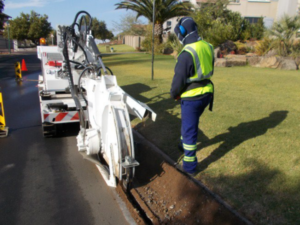 MetroFibre completed the micro-trenching process in Summerstrand covering a 5km area in under two weeks.

Summerstrand, in Nelson Mandela Bay, has become one of the first areas in the Eastern Cape to get fibre internet infrastructure installed using an innovative process called “Micro-trenching”. The Nelson Mandela Bay council provided permission to MetroFibre Networx on a proof-of-concept basis in May 2019.  The results have been a much faster, cleaner and less disruptive process for residents and the metro alike.

“For residents of Summerstrand in Nelson Mandela Bay, the council’s decision to test the micro-trenching process has been an absolute win.  It has saved residents untold disruption and upheaval common with traditional hand-trenching methods. Micro-trenching is both less invasive and much quicker. Deployment time is reduced by between 60 to 80 per cent.  There is also much less chance of consequential damage to any surrounding infrastructure, which can prove problematic for local councils and residents,” explains Henry Wilkens from MetroFibre Networx.

MetroFibre completed the micro-trenching process in Summerstrand covering a 5km area in under two weeks – from the very first cut to installing and completing the entire installation of the fibre infrastructure.

It’s an innovative approach by the Nelson Mandela Bay metro that puts the interests of the residents first and certainly lessens the aesthetic impact on its scenic, tourist environment.

“We are looking at deploying this methodology more widely in our national operations to firstly lessen the impact and inconvenience in the areas where we operate and to dramatically increase the speed to market for clients to get connected to fibre internet,” concludes Henry.