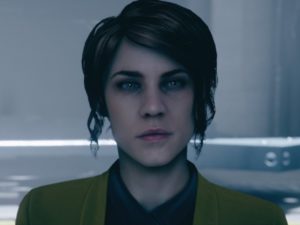 Jesse Faden, the protagonist of Control. Image sourced from Twitter.

Control is a third-person action-adventure video game developed by Finnish video game developer Remedy Entertainment Oyj and published by 505 Games. The game was released on 27 August 2019 and is a new IP from Remedy written by Josh Stubbs, Anna Megill and Creative Director at Remedy Entertainment Sam Lake. Control was directed by Mikael Kasurinen and developed with the Northlight game engine.

The story focuses on a mysterious agency called the Federal Bureau of Control (FBC) that researches and investigates paranormal activities. Players control Jesse Faden, a young woman who comes to the Bureau headquarters, called The Oldest House, in New York to uncover the truth behind a traumatic event that occurred when she was a little girl. Without getting into spoiler territory, Jesse becomes the Director, the head of the FBC, within the first few minutes of the game. In addition to figuring out the events of her past, Jesse also has to deal with the issues and enemies running amok in The Oldest.

Control is a very unique game, especially concerning its gameplay and narrative. As the story progresses, players will be able to acquire different abilities to help them in different situations. For example, Jesse will be able to grab different objects or rip bits of concrete from pillars or tiles from the ground to throw at enemies and obstacles. Jesse, after assuming the role of the FBC’s Director, obtains the Service Weapon that only the Directors of the FBC can control. The Service Weapon is unique in the fact that it looks like a pistol, but can transform into different weapon forms, which the player constructs over the course of the game.

The Service Weapon automatically reloads over time so the player is not required to find ammunition. The abilities Jesse has all have cool-down times, so the player has to utilize both Jesse’s abilities and the Service Weapon to be effective and deadly in combat. Jesse can construct an impromptu shield out of debris to protect herself from enemy fire, and this ability can be upgraded so that Jesse can launch the make-shift shield to deal damage to enemies. The gameplay that Control creates for the player is fun, frantic and exciting. The moment-to-moment gameplay that the combat system provides is extremely rewarding and enjoyable, and enemy variety challenges the player to always be alert.

The story Control tells is an interesting one. Jesse enters the bureau for her own objectives but is immediately swept into a whirlwind of mystery, danger, conspiracy and the supernatural. An otherworldly force called the Hiss has invaded over The Oldest House, incapacitating some of the staff and taking control over the others. Jesse has to fight her way through Hiss-controlled human beings to uncover the truth. The Oldest House itself is an intriguing place. The building is an ever-shifting place that reveals new locations as Jesse progresses through the story and unlocks Control Points. The Control Points act almost as home-bases for Jesse, where she can craft new personal or weapon mods to suit the players’ play-style, choose combat-based challenges called Board Counter-measures and even fast-travel between Control Points to cut down on travel time. 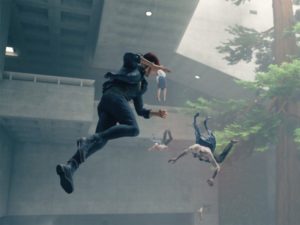 Jesse uses her Levitate to get close to an enemy. Image sourced from Twitter.

The Oldest House can seem daunting when the player first starts the game, as every area is unknown to the player. As the game progresses, however, the player will gain a sense of familiarity with the different floors of The Oldest House. Upon completion of the game, I found that although The Oldest House is well-designed and has a lot of nook and crannies for players to discover, the building could have been much larger. Discovering new areas is a treat, but once all the areas of The Oldest House have been discovered, the feeling that more could have been done with this amazing setting starts to creep in. This leads to one of the game’s major flaws: the map. The map of the building serves its purpose well enough but can be very frustrating when the player is trying to navigate this ever-changing place. The map is presented to resemble a building blueprint which may seem standard, but it can often lead players to literally run into walls, constant dead-ends and wrong locations. It is not a game-breaking problem but it is a very frustrating one.

The main story missions are also a bit of a let-down. They are fun to play and lead to intriguing discoveries, but they are not terribly exciting or varied. The story missions are exciting in the beginning, but tend to drag towards the middle of the game. The game picks up towards the end with an incredible story level, but the game ends with a so-so final encounter. These main missions are not terrible by any means, but they make you wish the developers added a little more variety to them. When it comes to the actual story, the game falters a little here too. The story starts off very strong, introducing the player to a great world and an exciting mystery. As it progresses, the quality dips from time to time and unfortunately severely drops towards the end of the game. However, the story manages to pick itself up and finishes on an acceptable tone. It is not a terribly exciting conclusion, but it is one that people will be able to tolerate. Remedy Entertainment has announced 2 story DLCs (downloadable content) that will hopefully expand on the game’s lore because the world that Remedy has created with Control is a truly fascinating one.

The side missions, however, are incredible fun, creative and awesome. The boss battles you encounter while doing these side missions are immediately memorable. The game does not have a difficulty setting so it can be brutal at times. These boss encounters are evidence of the game’s unforgiving nature. The battles can be frustrating but they are not unfair, which is an important thing to note. I found myself dying at the hands of these bosses a lot, which led me to switch up my mods, weapon types and strategies. The game encourages you to try out different play-styles to see what works and what does not, and there is no “one perfect solution” for any situation in the game. These side missions, in addition to adding incredible variety and exciting fun to the game, also expand greatly on the game’s lore. The lore and setting of the game are phenomenal, and these stories add more context to certain characters you meet and are told about, as well as certain situations that give more explanation to Jesse’s main mission.

The collectables players are discovering throughout the game are varied, plentiful, rewarding and incredibly fascinating. These range from documents that detail enemy types and certain objects that the player comes across, to multi-media items like recordings and scientific videos that explain certain concepts and ideologies that the game introduces to the player. These collectables are incredibly engaging and creative, and in some cases can be very unsettling. Some collectables also hold valuable information that the player may need in certain situations. Upon completing the main story I found myself taking time to go through the collectables to expand on my knowledge of the game’s lore. Remedy Entertainment has also included some fun easter eggs and references to other pop culture work, and have even blown people’s minds by connecting the universe of Control to some of the other universe’s that Remedy has created. 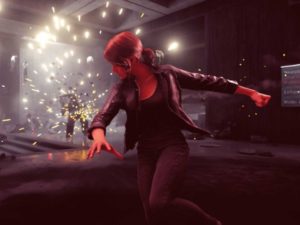 The characters in this game all do their job well. The player will not really get emotionally attached to some of them as a result of their roles and the way they are written, but they are helpful resources for Jessie. Some characters, however, stand out amongst the rest. Ahti is the FBC’s janitor but is also an incredibly strange and mysterious individual who seems to know more about what is going on than some of the higher-level employees. Ahti is a very intriguing character who is brought to life by Martti Suosalo. Another memorable character is Dr Casper Darling, the bureau’s Head of Research. Darling has no in-game character model as he is only seen via live-action videos the player collects throughout the game, as well as referenced in documents the player can also find. Darling is an integral part of the story and is brilliantly portrayed by Matthew Porretta. The voice acting is great across the board, in particular, Courtney Hope, who voices Jesse Faden, and James McCaffrey, who voices Director Trench, delivering amazing performances.

The soundtrack of this game, composed by Petri Alanko and Martin Stig Andersen is good, setting the appropriate mood for each unique situation the game puts Jesse in. The facial models are solid, although some may find them sub-par or off-putting. The graphics over-all are great, but it is the lighting that really blew me away. Remedy Entertainment did an amazing job with the lighting, evoking feelings of shock, danger, anger and power in the player. I was constantly blown away each time I entered a new area and saw how the lighting completely changed the tone of the game.

One of the main problems I encountered with the game was the terrible drops in frame rate. This would routinely occur during action scenes, especially when Jesse would use her special abilities. If there was a lot happening on-screen, the frame rate would drop considerably, terribly ruining the game experience and, in some cases, leading to the player’s death. The game would also stutter every time I would exit out of the pause screen. The game was reviewed on a standard PlayStation 4, so the game may be better optimized for other consoles. However, this is still a deal-breaker for some people. Remedy Entertainment has said that they are looking into a number of player-reported problems and are working on solutions, so hopefully, they will be able to sort out the frame rate issue.

Remedy Entertainment has created a unique experience with Control. The gameplay is engaging, rewarding and incredible amounts of fun and is one of the highlights of the game. The Oldest House is a great environment and is fun to explore, but Remedy could have expanded the FBC headquarters a little more. The building is packed with incredibly valuable and interesting collectables that expand on the game’s lore and story. Remedy has created a game universe that is incredibly intriguing and mysterious, and open to speculation from the public. The game is let down by some sizeable missteps in the narrative and horrific performance issues. Control is an interesting and fun experience, and I am intrigued to see what Remedy does with this new IP.