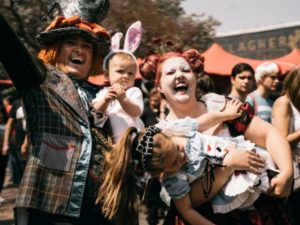 Comic-Con Africa is the African iteration of one of the world’s most popular conventions, Comic-Con. Comic-Con Africa debuted in 2018 at the Kyalami Grand Prix Circuit and International Convention Centre in Johannesburg, South Africa. This year the convention took place at the Gallagher Convention Centre in Johannesburg, South Africa, from 21 September to 24 September 2019.

One of the biggest changes from last year’s convention is the new venue, which allowed for more exhibitors and a larger attending crowd. As a result of this, Comic-Con Africa 2019 saw 71,000 attendees over the course of the four days the convention ran for. Comic-Con Africa 2019 featured 300 exhibitors. The convention also featured 7 large halls dedicated to different attractions such as gaming and esports; celebrity photo-op and autographs; general pop-culture, live-action role-playing, and comics; artist alley and cosplay, table-top games and so much more. The main stage at the convention featured numerous panels such as live-draw sessions by famous artists, actors Q&A panels and more. One drawback is that the more popular events that took place on the main stage were few and far between, and seats were empty for the majority of the other panels.

Another drawback was the lack of giveaways that took place during the convention. Attendees were also confused as a number of the giveaways that occurred during the convention were not widely advertised. The scope of Comic-Con Africa 2019 was mind-blowing, and the entire convention, despite certain events running behind schedule, ran as smoothly as possible. The convention featured 12 international comic artists as well as 12 local comic creators and 4 international films, TV series and gaming celebrities. According to Reed Exhibitions, the convention featured over 120 hours of content, 26, 000 square meters of event space and an esports prize pool to the amount of $86,400.

The artist alley at Comic-Con Africa 2019 tripled in size from 2018’s iteration of the convention. This hall featured live-drawings, artist Q&A sessions and much more. Attendees were also spoilt for choice as all the artists in the artists’ alley were selling their artworks and merchandise. The convention featured an incredible amount of people cosplaying as their favorite characters from numerous Pop-Culture franchises. Competitions, such as TikTok’s WoahTikTok competition, attracted and entertained both on-lookers and competitors alike. The addition of more competitions such as this in next year’s iteration of Comic-Con Africa will greatly increase attendee participation and create memorable experiences as well.

The main stage was home to the celebrity panels, where attendees were able to listen and ask questions to celebrities. This year, Comic-Con Africa featured international celebrities William Shatner, Daniel Gillies, Nolan North, and Troy Baker. The panel sessions for these guests were incredibly full, with some attendees opting to sit on the floor just to get a glimpse of their favorite celebrities. Actors Anthony Mackie and Isaac Hempstead Wright were booked to appear at the convention, but circumstances prevented them from doing so. Despite these actors not being able to make it, which is of no fault to Reed Exhibitions, the guests that attended Comic-Con Africa 2019 wowed and amazed attendees. The inclusion of more international guests in next year’s convention’s schedule will be well received by fans. The Comic-Con After Dark events were incredibly lauded by attendees for the creativity and exclusivity of the events. The inclusion of more Comic-Con After Dark events to next year’s convention’s agenda will be incredibly well-received.

Comic-Con Africa 2019, much to the surprise of attendees, featured a large gaming presence. A large hall was filled with PlayStation, Nintendo and Xbox showing off their latest games with attendees able to get hands-on time with their most anticipated titles. The esports stage was also a sight to behold, as local esports teams were competing to be the victorious team in esports titles such as Counter-Strike: Global Offensive. Numerous other games, such as Fortnite and Street Fighter V, also held competitions where attendees strove to show off their skills and prove their worth. Reed Exhibitions did an amazing job organizing the large gaming companies to exhibit their upcoming gaming releases.

A new addition to the Comic-Con Africa experience was KidsCon, a child-focused convention that had an entire hall dedicated to it. The convention, claims Reed Exhibitions, featured Africa’s largest LEGO activation. Children were able to see their favorite cartoon characters brought to life. The convention dedicated an entire hall to table-top gaming, which was an incredibly popular location during the convention. It was a treat to see gamers playing their favorite table-top games and making new friends who shared their passion. Comic-Con Africa 2019 also featured the Business of Gaming Forum which took place on 23rd September 2019. This forum saw speakers deliver keynote addresses and panel discussions. IT News Africa was not in attendance as their request for accreditation for the forum was not addressed.

Comic-Con Africa 2019 was an incredible success that featured numerous events and exhibitions that were sure to excite attendees who may not usually attend such events. There were a few missteps with certain guests not being able to attend and a lack of well-advertised giveaways and a better-organized panel schedule. Reed Exhibitions took feedback from last year’s convention and applied them to make Comic-Con Africa 2019 a bigger and better event. There is no doubt that if Reed Exhibitions continues listening to feedback, Comic-Con Africa 2020 may just be the biggest pop-culture in Africa.

Images from Comic-Con Africa 2019 are featured below: