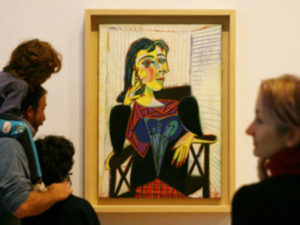 The stolen Picasso that vanished for 20 years and was found this week underscores the urgent need for innovative technology to help crack down on crime in a $40bn art market.

This is the warning from Stephen Howes, renowned art dealer at Thomas Crown Art, the world’s leading art-tech agency. His comments come as Arthur Brand, an art crimes investigator in Amsterdam, said on Tuesday that he had recovered Pablo Picasso’s 1938 painting “Portrait of Dora Maar,” which was stolen from the yacht of its Saudi Arabian prince owner in the south of France in 1999.

“Crime has been a considerable problem that has persisted for centuries, one that’s affected artists including da Vinci, and Van Gogh,”  affirms Mr Howes.

The case this week of the stolen Picasso masterpiece that was recovered 20 years later shows you that crime is a problem that continues to plague the art industry, impacting artists, collectors and galleries.

“Indeed, it’s a problem that seems to be on the rise. It has been reported that the vast majority of art and antiquities on major retail bidding sites are thought to be artistic fakes. Meanwhile, according to research, more than 90 per cent of museum art thefts involves an insider, often using high-level forgery techniques to produce fakes.”

This is where the ground-breaking, game-changing blockchain technology comes in.

“It provides the ability to store a permanent, immutable record of artwork at the point of creation or beyond which can be used to authenticate registered works by anyone with an internet connection.

“Tracking these valuable pieces and registering their records creates a chain of custody that documents their ownership and transfer. This can include noting the pieces’ auctions, sale values, shipment and other verified information without disclosing sensitive personal data of the owners.”

Thomas Crown Art, which uses blockchain for such provenance purposes, has also gone a step further and created a mechanism to use physical artwork as a store of value by ‘walletising’ each piece of art and linking it to a Certificate of Provenance stored on the blockchain in a ‘smART contract’ – enabling the option to use the physical artwork itself as a wallet making it capable of storing cryptocurrency.

“If blockchain had been around 20 years ago, it might well have stopped this incredible Picasso piece being lost for more than two decades,” concludes Howes.

“We now have the tech. And this case should serve as a wake-up call for the art world to invest more in blockchain to protect artists, galleries, and private owners and collectors, and drive confidence and global sales.”