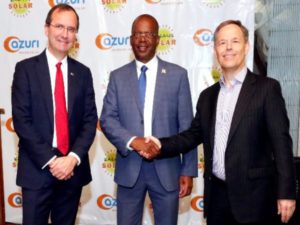 The investment will also provide people living in remote areas of Zambia with clean, affordable and reliable energy and access to modern energy-efficient technology. “Azuri believes African consumers, regardless of wherever they may live, should be able to access affordable modern digital services and devices that have a positive impact on daily life and on livelihoods,” said Simon Bransfield-Garth, CEO of Azuri Technologies.

“Pay-as-you-go solar power is connecting off-grid households to the modern digital world through reliable, clean energy and highly efficient products such as AzuriTV which delivers social and economic benefits that many urban users have experienced for years,” Bransfield-Garth continued. “Renewable energy such as that offered by Azuri can is a catalyst for rural development through improved access to information, improved productivity and new employment opportunities, as well as supporting Zambia’s commitment to mitigating climate change,” added Matthew Nkhuwa, the Zambian Minister of Energy.

AzuriTV is the first completely-solar television and satellite package that was designed and created for customers living in remote and secluded areas across the African continent. AzuriTV consumers pay for the solar television and satellite package in the form of regular weekly instalments. Once the system is completely paid for, the energy generated from that point on will be free of charge.

“Solar power has the potential to transform the lives of millions of people who are still living off the grid,” said Fergus Cochrane-Dyet, British High Commissioner to Zambia. “Azuri embodies the pioneering spirit of innovation for which the UK is globally renowned. The launch today showcases the cutting-edge technology and expert services that British firms can offer to rapidly-expanding markets across Africa,” added Cochrane-Dyet.