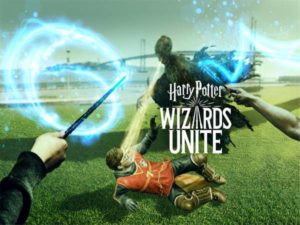 Harry Potter: Wizard’s unite is an augmented reality mobile game co-created by Warner Bros. and video game studio Niantic. The game was set to release on 21 June 2019 but released a day early on 20 June 2019 for iOS and Android devices.

The game gives the players the job of exploring the real world to hunt down magical objects and creatures before Muggles (people without the ability to use magic) discover the existence of the Wizard World. Players will use their smartphones to track these objects down and cast spells to trap them by tracing their fingers across the phone screen.

Niantic’s previous game, Pokémon Go, released in 2016 to incredible hype and excitement, with millions of players taking to the streets of the real world to capture and train virtual creatures called Pokémon. Some individuals even quit their jobs to travel the world and capture Pokémon, as certain Pokémon were only available in certain places across the globe. The release of the game was also met with controversy, as some players would wander into oncoming traffic while trying to obtain these virtual creatures.

Although the game is out, the studios will still work on the game to fix the problems that interfere with the users’ experience and add new content. Harry Potter: Wizards Unite is currently out in the U.S. and the U.K, but is not available in Africa and many other regions in the world. Pokémon Go released in 2016 first in the U.K. and U.S. as well, and South Africans were not able to get their hands on the game until months later. Hopefully the international roll-out of Harry Potter: Wizards Unite will not take as long.