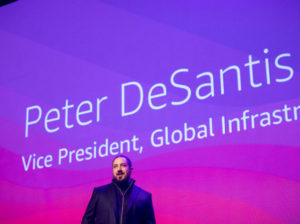 The 4th Amazon Web Service Summit took place at the Cape Town International Conference Centre on Thursday, 11 July 2019. The free, one-day event saw over 4000 attendees with over 40 presentations and more than 20 sponsoring partners. It provided Amazon Web Services with an opportunity to show off its range of products, while partners had the opportunity to display how AWS is helping their businesses.

During his keynote, Peter DeSantis, Vice President, AWS Global Infrastructure and Customer Support revealed that the company’s approach to building mobile structure is fundamentally different than its competitors.

He said, “We have development teams working on other critical areas of AWS, we’ve also got a team that helps support our AWS developer and customer in South Africa.”

“We have a diverse fully featured platform with over 165 services, relational databases, non-relational database, analytics, mobile services, and IoT machine learning. It has always been part of a much deeper development functionality,” stated DeSantis.

Amazon will be opening an AWS Region in South Africa in the first half of 2020. The region will enable more African organisations to leverage advanced technologies such as Artificial Intelligence, Machine Learning, Internet of Things (IoT), mobile services, and more to drive innovation.

“We have tens of thousands of customers in Sub Saharan Africa because it is one of the largest retailers in Africa. Because our compliments are over 80,000 spread across 1300 stores. The company has moved its e-commerce platform, data analytic systems, mobile custom application, and SAS business,” revealed Prebashni Naidoo, enterprise regional regional sales manager for AWS in Sub-Saharan Africa.

“As part of driving innovation, we are expanding our teams, both in Cape Town as well as in Johannesburg,” said Naidoo. In 2004, AWS opened a development centre in Cape Town that focuses on building pioneering networking technologies, next-generation software for customer support, and the technology behind Amazon EC2.

“AWS continues supporting a variety of entrepreneurs and startups in the region. We are continuing our training investments both through locally-led AWS trading but also through our partnerships supporting local universities and institutions,” she said.

In March this year, Amazon held the first-ever AWS pop up loft event in Johannesburg. The Pop-up Loft offered a variety of activities, including technical sessions, workshops and in-person AWS technical and business guidance from AWS experts.