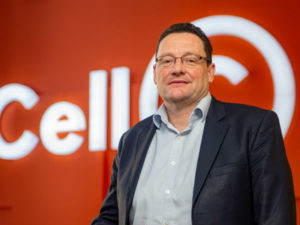 Craigie Stevenson joined Cell C in October 2017, post the Blue Label recapitalisation, in the position of Chief Operating Officer. He was responsible for the critical operational divisions of the business including; property and procurement; technical operations, which comprises network operations and IT; and the regional retail operations.

Here are 5 things you need to know about Craigie Stevenson:

1. He holds a Master of Business Administration from the University of the Free State as well as a Bachelor of Accounting Science (Honours) from UNISA.

2. Prior to joining Cell C, Craigie Stevenson was Chief Executive Officer of Telekom Networks Malawi Plc, where he was instrumental in the launch of its 4.5G network.

4. Craigie Stevenson is well versed in challenging markets and implementation at various organisational levels, with a strong focus on strategic leadership and performance.

5. He has over 20 years of experience, having served in various senior positions across Africa, including South Africa, Malawi, Tanzania and Mozambique.